on April 11, 2020
We are located with our catamaran Katinka about 14 nautical miles west of Rome in a small marina on the Tiber Channel. Actually, last month we wanted to go further south and then along the Sicilian coast, get out of the Mediterranean Sea and start the Atlantic adventure. But as so often everything came completely different and now we are stuck here and unfortunately we cannot report about our travel experiences but have to deal with completely different things.

The Italian state, like most of Europe, has imposed quarantine on its citizens. There is nothing to criticise in the first place; unusual circumstances require unusual measures. But is quarantine really what we are being given? Wikipedia says: "Quarantine is a temporary, officially ordered isolation of people, animals or plants suspected of having certain infectious diseases or of being carriers of these diseases in order to protect a society from contagious diseases". In other words, we are all suspected of being ill or contributing to the transmission of the disease. In other words, society is protecting itself from itself at the moment. I can somehow understand this, but if you carry on with this thought, there is no longer any thought of lifting the quarantine. I don't mean that we are all a little bit ill, at least it doesn't have a contagious effect on most of us, no I mean the protection against dangers that emanate from a society and cause the death of people, in this society. I am always exposed to this danger as a member of a society. So if you quarantine a whole society, you can't really lift it anymore. 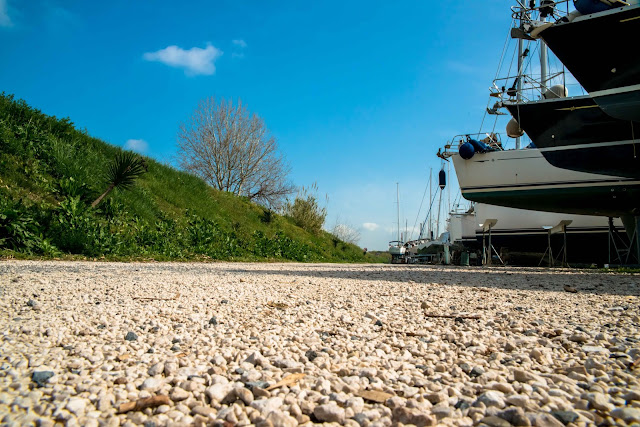 Crisis management is as simple as that if you think in political terms. Obviously, our politicians have run out of advisors or those who still have their heads free are not being listened to because they are launching one horror scenario after another, not taking their foot out of the door. So, since you cannot quarantine a society as a whole, for some people this means that they are really in quarantine and for others it means more or less protective custody. Here in Italy there are currently about 150,000 people in quarantine and about 59.85 million people in protective custody. I do not want to calculate that for Europe. However, here, we arrive at a completely different approach, which seems to be drowning in all the fears that each of us has. Europe has abandoned the rule of law because it is unable to respond adequately to the situation. How else to interpret a protective custody that affects 90% of the population. I exclude Sweden and Hungary from this. The Swedes do not have protective custody, and Hungary, under Viktor Orban, the cunning farmer from the Puszta, has had the necessary room for manoeuvre assured to it by parliament and has put all the rule of law on ice from the outset. That was clever because no one will be able to get at him afterwards. The situation is different in the other European countries. That is why the one or other government is pushing around with its statements. Every day there are different regulations, which are punished draconically if ignored. In Germany, for example, it was decreed that Germans coming from abroad must go into 14-day quarantine. This does not apply to business travellers. Hello? What's the difference now? Further it says: "If you violate this regulation, you can be fined up to 25000€". A corona test costs between 150€ and 200€. The test result can be provided in 5 hours. Even if it takes three days this would still be justifiable in my opinion. What on earth justifies such measures? It clearly shows how incapable our governments are of dealing with the crisis. They are trying to suggest to the general public that security is not there and is being built up only hesitantly. They are only reacting to the latest figures, and it is time to start acting. 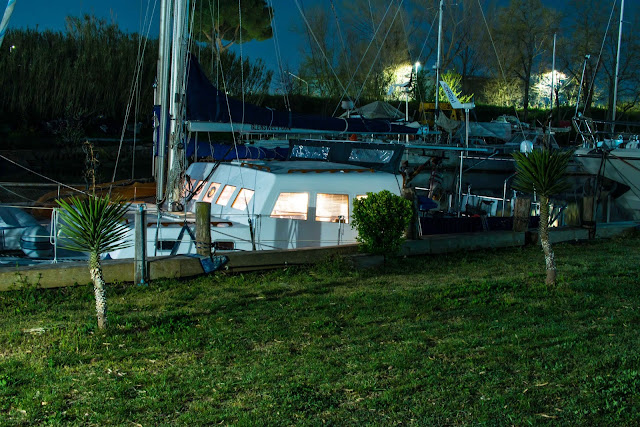 There are other ways, as the example of South Korea shows.
Crisis management first:
Take immediate action. Until I know who is suspect, everyone is suspect. For a short time, that's okay. The society that can afford it can extend this period at will. But one thing is clear, we all pay the bill in the end and many a country already has problems with this, as the current discussion shows. All the more incomprehensible that no action is being taken. The only thing to do is to fight the symptoms by pumping billions of euros into the system. You do not fight the cause, so you simply stop at immediate action.
Crisis management, secondly:
Take action. Learning from best practice. Surround and isolate the suspect. Test, test and retest. The Koreans have demonstrated this and succeeded. We here in Europe are tearing each other to pieces, and all we get from the President of the European Union, who could one day take on a leading role here, are just slogans of perseverance, nothing really helpful, but we put all our energy into this. We buy masks and protective gloves, which we block by the state for the country of destination and then, when we actually have them in our hands, we simply drop them, it no longer matters anyway, and everything goes to the dogs anyway. Instead of using the billions to get an overview and isolate the suspects. creating spaces to ensure a "normal life". Helping people to help themselves. Keeping the economy alive and not watching it die like the many victims that could not be helped because the facilities were rationalized away in the past. As already said, we all pay the bill.
Crisis management third:
Testing effectiveness and sustainability. Once you have managed to get the crisis under control to a certain extent, it is a matter of avoiding setbacks, making improvements where necessary and possibly taking new measures. It makes sense to take a sober view of the situation, to educate the population and to leave emotions aside, even if the situation makes it difficult to do so.
Crisis management the fourth:
Lessons learned. As we are still on the subject of immediate measures after four weeks - my former employer would have dismissed me without notice - I would not like to dwell on the fourth point. Just this much, in principle, for those who have already dealt with crisis management in their lives, the procedure is clear. Obviously, however, only a few people in politics have done so, and the so-called experts who are consulted here seem to have no idea about it, or at least they have pushed it far behind in their studies. 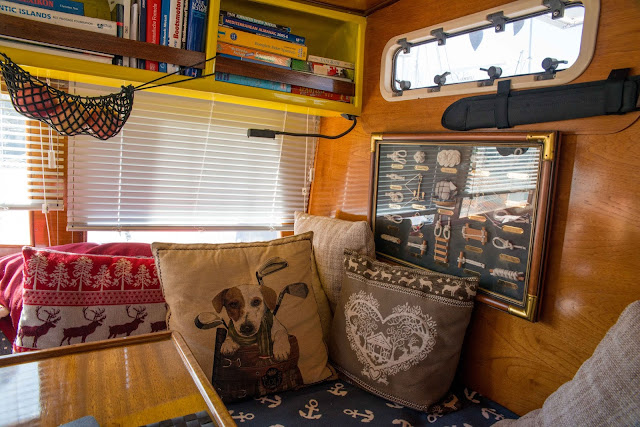 As you have no doubt noticed, after 30 days of quarantine and no end in sight, I am slightly frustrated with the crisis management of our leaders across Europe, with minor exceptions, and am thinking about stopping our circumnavigation and going into politics. Don't panic now, you will not see that again in this lifetime. We just hope to continue our journey soon and that one or the other suggestion will penetrate upwards and that the situation will improve. This would certainly be helpful for the sick, as well as for the healthy, otherwise we would run the risk of remaining in this so-called quarantine until never-never. With this in mind, we wish you, as always,fair winds and keep a stiff upper lip. 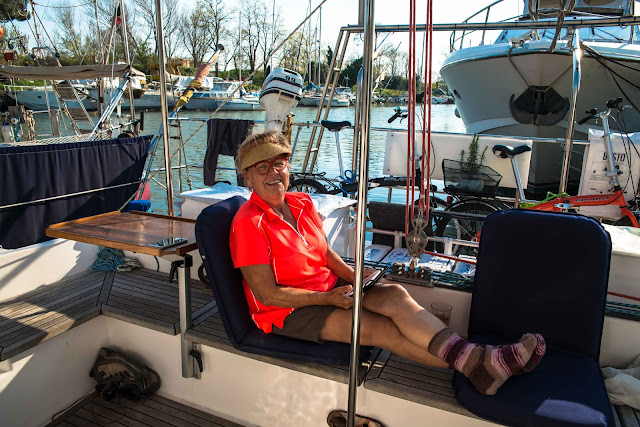 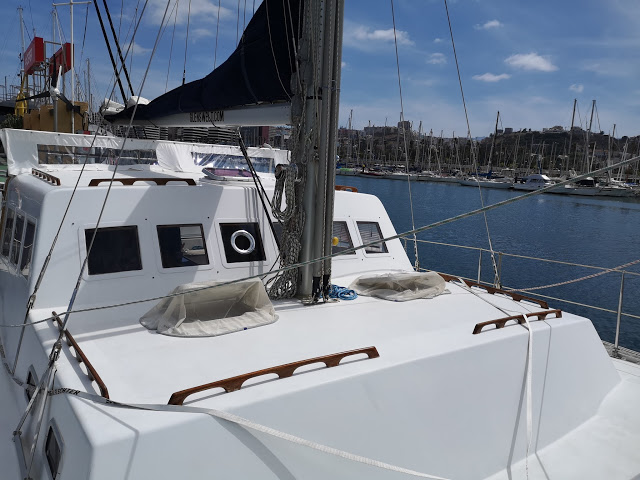 Always this trouble with the staff

The saleswoman in the Marine Shop smiles at me, then turns her head and yells to the back, "Here's a customer who wants to borrow a 64A plug"! A loud laugh can be heard from the back office. "Young man" she says, "We are a sales store here, not a rental company. If you want to have such a plug you have to buy it already, costs 56,95€". Red-faced, as if I were buying a pack of condoms, I whip out my credit card and pay for the plug. An hour earlier, I was in the Marina office and asked for the same plug that I had been offered when we arrived here. Now no one knows anything about it, and if I want electricity, I have to get the plug somewhere else. At a normal pier this would be no problem, there are 32A and 16A sockets, only here at the transfer pier the things are 64A. So a plug we never need again but what will you do. Katinka at the tranfer pier Las Palmas, Gran Canaria The Marineros are quite friendly, but the service then leaves much to be desire 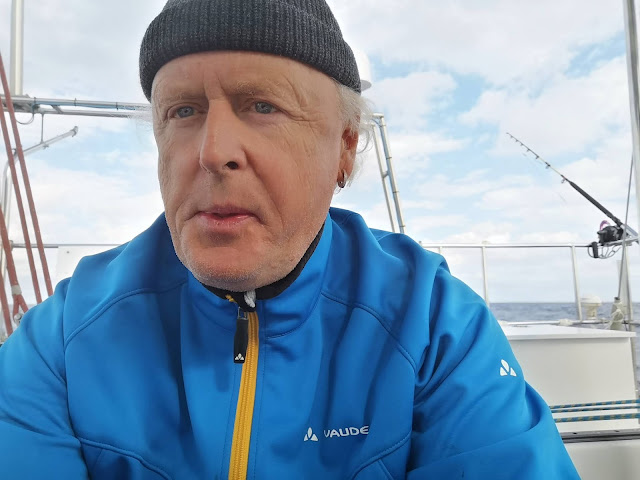 The sun leans towards the horizon and dazzles us enormously. Not only is it impossible to foresee what will happen when the sun will be shining in, but also in corona times new measures are constantly being taken in the individual countries to make the population feel more secure, but also to create more and more planning uncertainty. Acting with foresight is virtually impossible. Because one thing is clear, even in Germany, which has been praised time and again by itself "Here it is not yet as bad as elsewhere and we still have everything largely under control", it seems as if the government has so slowly lost control. The lack of creativity of the Corona measures amazes the skipper On the Canary Islands, since November 23rd of this year, a PCR test is required which must not be older than 72 hours, under the threat of a horrendous penalty of 6000€ if it is not presented. We sail into the night with a somewhat queasy feeling, the uncertainty is great, what will expect us at