on August 01, 2020
The sun burns down mercilessly, red dust whirls up under our shoes and the crickets, in the bushes we walk through, make a hell of a noise. The low bushes offer hardly any shade and so we are mercilessly exposed to the sun. I have neglected to keep the safe distance between Gaby and me. A huge mistake as it now turns out, because the first expressions of displeasure reach my ear despite the noise of the crickets. We drove with our scooter, which we rented for a few days, to the other side of the bay Porto Conti and are now in the middle of the national park.
The destination is Cala Barca, a bay with an island off the coast. The island Piana must not be entered for reasons of nature protection, but we want to have at least a look at it. So we go ahead, listening to the mumbling behind me, when a gate blocks our way. A scorching heat and the barking from behind gets louder and louder and now drowns out the noise of the crickets by far. Next to the gate is a hole in the fence through which I quickly slip and try to keep the necessary safety distance. Gaby follows grumbling, because I have a decisive advantage, my sense of orientation is much better than hers. We reach the Cala after a march of about one hour and are impressed by the natural spectacle. On the way back we stay in the pine forests that provide more shade. But we do not find a suitable exit from the park, so that we without further ado climb over a gate in order to get back to the open air. After this forced march, after all a good 10 km, we first allow ourselves a bath in the sea that soon makes us forget the strains. 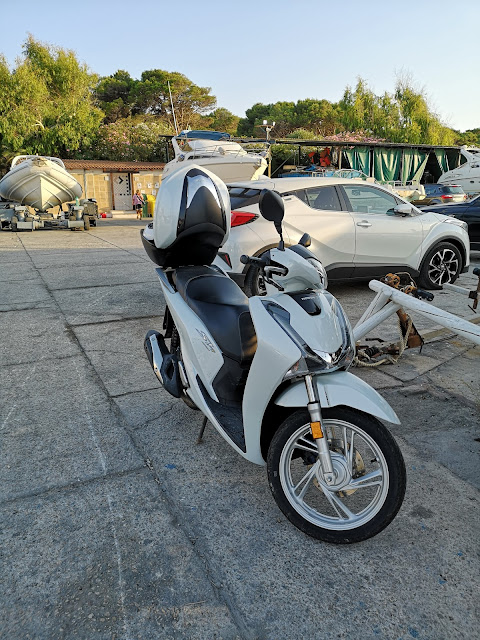 With a scooter you are much more flexible and so nothing stands in the way of a first city tour of Alghero. We park in the harbour area in front of the pedestrian zone and have a look at the old town. The city walls are still very well preserved, the city centre very touristy, but the streets with their pebbles are very interesting to look at.
Since we are located in the middle of a nature reserve with our Katinka and the shopping possibilities here are not very big, we use every opportunity to stock up on provisions. So also now, after we have visited the old town, we go to a nearby supermarket to shop. Fully loaded, the "sixpack" of water between our feet, we drive with our scooter back to the marina.
One day later we reach our next destination, Sassari, after about 30 km on a side road. We expected more from the city and are a bit disappointed. It seems as if the city is stuck in the 70s of the last century. At least there are more beautiful cities and so we don't stay very long and start our journey home. A good thing was the drive to Sassari, on the way there we discovered a farm that offered Sardinian specialities in its restaurant. We decide to visit the farm in the evening. A little searching we finally find the restaurant on the large hacienda, with the magnificent entrance gate and the extensive grounds behind the walls. A small path, paved with terracotta, leads from the parking lot to the entrance. As soon as we entered it was clear that this was not going to be a cheap evening. A large fireplace in an even larger room created a pleasant atmosphere. The tables are simply but tastefully set with red tablecloths. We are led to a large table and take a seat. The menu is clearly arranged, there are only two choices. A Sardinian menu for 35€ and a slimmed down version for 25€. If so, we think and order the whole menu. This consists, including the house wine, of products made on the farm itself. The so-called "starter" consists of ten different tapas, followed by the first course, two different types of pasta. We are already well full. Only that they always leave us enough time between the courses helps us to cope with the whole thing. The main course follows, suckling pig and spare ribbs in a red wine-rosemary reduction. For dessert there is homemade nougat, a coffee and an iced schnapps of your choice. The 35€ per person were really well invested, only with getting up we have our trouble. A really nice evening comes to an end.
Since the scooter riding works quite well, also Gaby gets used to it slowly, we planned a somewhat longer tour the next day. We drive along the coast to Bosa on the way there. The town is located at the river Temo and was already populated by the Phoenicians. In the 12th century a castle was built, the ruins of which pillory over the city. The houses of the small town meander along the hillside with narrow alleys, making the place very interesting. On the way back, after a while we turn off the coastal road and drive up a pass road. We are a little surprised about the thin settlement of this region. Between Alghero and Bosa, after all a little over 50km, there is no further settlement. I feel a little sorry for the 125ccm scooter, because with its heavy load, it hardly manages the ascent. At the top I give him a little break, we have a coffee in the village bar and watch a motorbike race with the locals. Over a small country road we reach Alghero again, where we do our obligatory shopping.
In the meantime our solar modules are on their way from Germany to Sardinia and as we are used to it by now, it goes from Germany to Italy very fast, but then nothing works anymore. No way! The tracking was interrupted from Italy, but the package reached us two days earlier than announced. Someone is complaining about the Italians once again. The only problem was, all 4 modules are damaged. Someone dropped the package while repacking it, so that the modules have dog-ears on one corner. After I measured all the panels and they work, I decided to install them. Since the solar panels arrived early we can use the good weather window on Thursday and bring forward the crossing to Menorca. Unfortunately the forecast was more optimistic than reality and so we bob around in front of Cape Caccia until it gets too colourful and we start the engine. Out of habit I let the bait rush out of the fishing rod and on the plotter I notice a depth edge. Through the binoculars I notice some fishing boats driving along the edge. Well if now no fish bites I don't know what I say to Gaby. She just smiles at me pitifully and doesn't believe that anything will ever bite, except plastic bags and jellyfish, like in the past. I am very disappointed when we drive over the edge and again there is no bite on the hook. Two hours later I'm standing on the rail, dressed only in my harness, tied to the railing and trying to reel the damn line in. Only the one hanging at the other end is fighting back. I am bathed in sweat and turn the line onto the drum centimetre by centimetre. After an eternity I see the first shadow in the water and think to myself what a huge creature. 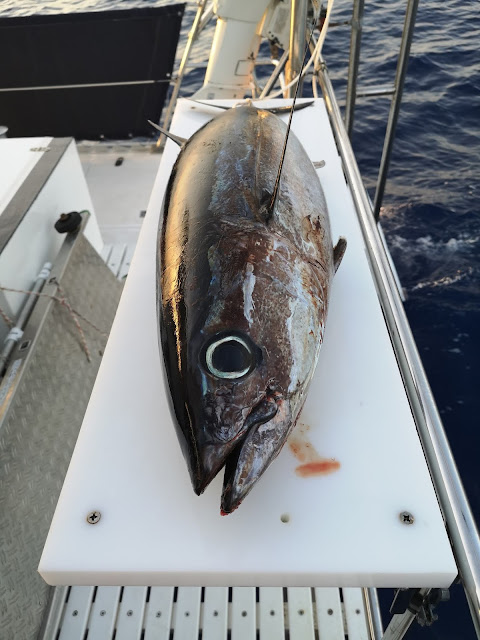 In the meantime, a pair of work gloves was added to my sparse clothing. Now I only need the gaff I said to Gaby, "what is that? The stick with the hook on it", so that was also clarified. The bait is still 10m away from the boat and now it was clear that it is not a plastic bag. The big eyes of a yellow tuna look at me. With the gaff I pull him on deck. Last but not least there is 1m of 8kg tuna on the table which has to be cut up before sunset. My first tuna fish and then immediately such a splendid specimen, we eat now for quite a while on it. The next morning there was still very little wind, but it comes from aft and so I decide to unpack our "Crusingshoe". 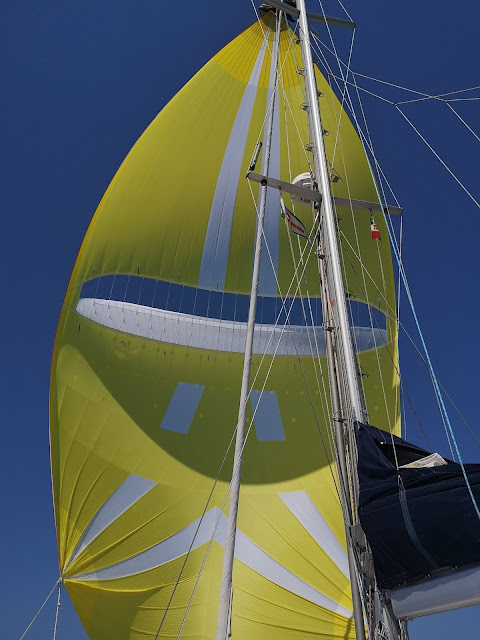 A 125 square meter parasail. With 7 knots of wind it brings us forward with 5 knots, what more can you ask for. Unfortunately, the wind falls asleep completely towards evening and the engine has to go back on. The tuna steaks are a self-explanatory pleasure and so we sail towards Menorca in the sunset. How we are doing in Menorca and Spain we will tell you next week. Until then, as always, Fair winds and keep a stiff upper lip.

We are located with our catamaran Katinka about 14 nautical miles west of Rome in a small marina on the Tiber Channel. Actually, last month we wanted to go further south and then along the Sicilian coast, get out of the Mediterranean Sea and start the Atlantic adventure. But as so often everything came completely different and now we are stuck here and unfortunately we cannot report about our travel experiences but have to deal with completely different things.

The Italian state, like most of Europe, has imposed quarantine on its citizens. There is nothing to criticise in the first place; unusual circumstances require unusual measures. But is quarantine really what we are being given? Wikipedia says: "Quarantine is a temporary, officially ordered isolation of people, animals or plants suspected of having certain infectious diseases or of being carriers of these diseases in order to protect a society from contagious diseases". In other words, we are all suspected of being il…