Sailing Day or Why Don't We Actually Have a Motorboat?

The standing rigging is changed, the batteries are changed, the tarpaulin is finished. We've seen Tenerife, been to the highest mountain in Spain, and are ready for new adventures. Gran Canaria, a pebble's throw from Tenerife, is our next destination. 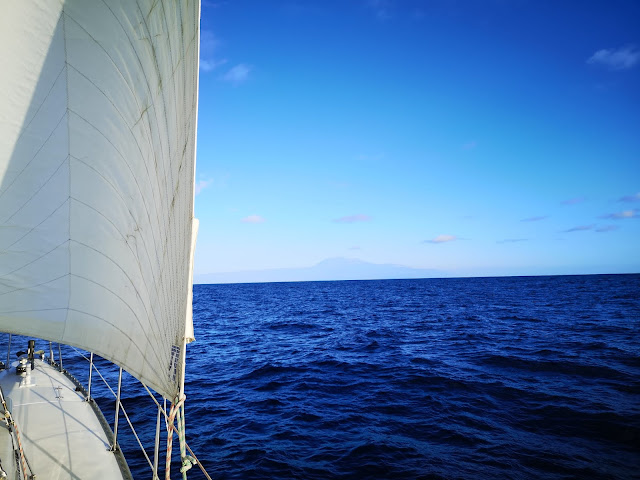 We start at three o'clock in the morning, the marinero on channel 9 is still asleep and does not respond to our announcement that we now throw off the ropes. In the cover of the island the wind blows weakly from the north, so that we have no choice but to use the engine. An hour later we can set sail and a moderate northeast wind brings us well ahead. However, it should not turn further to the east, otherwise we have to sail hard along the edge again, which our Katinka always honors immediately with a lousy speed. In any case, one feels extremely slow when the first fast ferries pass by. At five o'clock the first one has caught up with us and passes us by about half a nautical mile. A huge fountain at the stern hammering out. The first one has just passed us, the next one is already coming towards us. Unfortunately, we can not gain more north due to the prevailing wind, and further south we do not want to get too close to the lee coast of Gran Canaria and we were always happy to a certain safety distance. The horizon slowly turns red and it doesn't take long until the sun rises. The wind slowly falls asleep and of course turns further to the east. At two knots above ground the pain threshold is reached and we start the engine. I make myself a coffee and spill half of it, because the wave of the next fast ferry reaches us. These are the moments when Gaby chews her gum a little faster. "Do you also like a coffee" I yell up from below, but she declines with thanks. Obviously the gum and the coffee are not a tingly combination. Already at night the lights of Gran Canaria were visible, now during the day the coastal contours are clearly visible. We look back and see the mighty Teide standing out through the haze that is over Tenerife. The sun is shining and it is already 20°C warm at eight o'clock in the morning. The wind picks up again and turns a little to the north. We set sail again and switch off the engine. Calmness returns and the ship's movements become soft and pleasant. Gaby's stomach calms down, but she is still careful and we eat, just a fruit bowl with apples, bananas and oranges. The wind turns shortly before eleven o'clock again to east-northeast and we run the rest of the way under engine.
At 14.00 we reach the northeasternmost point, La Isleta, and set a southerly course to Puerto de la Luz the port of Las Palmas. Gran Canaria seems to have much more industry than La Palma and Tenerife. But maybe it is only because we pass directly the industrial port. In front of the port, cargo ships and cruise ships are lying in the roads, the terminals are bustling with activity and ships are being unloaded and loaded. A pilot boat is transferring to a container ship, and the next fast ferry is already coming around the corner. Thanks to AIS, all this is no longer a problem today and we reach the reception pier at 3:30 p.m. without disturbing the commercial shipping excessively.
Here we are first asked for a Corona test. Somewhat surprised, suspecting a misunderstanding, we say that we come from Tenerife. Friendly but determined they answered us that since Easter, if you change the islands, you need a Corona test. So first a negative test and then check in with all ship papers. On foot we make our way to the nearest hospital, where they gave us an antigen test for 30€. So slowly I become a test junkie, but I love it when the tears shoot into your eyes, when the nurse tries to penetrate through the nose into the sinus cavity with a chopstick. After an hour everything is done and we march back to the marina. The test, with evaluation, took just a quarter of an hour, the filling out of the forms and the registration in the computer system of the hospital the rest. At the marina we are told that there is no berth. The anchorage in front of the marina has been closed due to Corona, so they put us on the transfer pier.
26€ without water and electricity (which are extra). Does not sound much, but if you know that the berth including water and electricity costs only 10€, that is a significant difference. But there's nothing you can do about it, so every day I go to the marina office and ask if there's a spot available. In the meantime, we look at Las Palmas and find that the distances to shop are much further. Therefore, we have activated our bikes and also already made a few small tours through the city.
How the story continues with our berth and how our first market visit here in Las Palmas looks, you can read in the next week on www.glenswelt.com. Until then, always fair winds and keep a stiff upper lip.

We are located with our catamaran Katinka about 14 nautical miles west of Rome in a small marina on the Tiber Channel. Actually, last month we wanted to go further south and then along the Sicilian coast, get out of the Mediterranean Sea and start the Atlantic adventure. But as so often everything came completely different and now we are stuck here and unfortunately we cannot report about our travel experiences but have to deal with completely different things. The Italian state, like most of Europe, has imposed quarantine on its citizens. There is nothing to criticise in the first place; unusual circumstances require unusual measures. But is quarantine really what we are being given? Wikipedia says: "Quarantine is a temporary, officially ordered isolation of people, animals or plants suspected of having certain infectious diseases or of being carriers of these diseases in order to protect a society from contagious diseases". In other words, we are all suspected of bei

Never believe a statistic that you have not faked yourself, was once taught to me at the beginning of my work life. The latest development here in Italy shows that the old wisdom is still valid. As we are damned to do nothing here on the boat, we of course follow the press closely and read almost every article from home and abroad. We are particularly interested in developments in Italy, where we are affected by any changes ourselves. Since the press is swarming with all kinds of figures, we obtain our figures directly from the Italian Civil Defence, which publishes new cases in a statistic every evening. After the state had issued a curfew for the whole of Italy and an improvement of the situation could be expected after 10 days at the earliest, people longed for the day to come and hoped for a decrease in the numbers. In fact, the numbers also went down on days 10. and 11. on day 12, however, the numbers of the dead and newly infected rose again. On this day, the new numbers