on July 03, 2020
We were barely out of the bay Cale Rotonda on Favignana, when a strong south-east grabbed us and blew us towards Sardinia. The wave was now already one meter high, so there was still a lot to expect.
The Dar Melica of Janet and Heinz ran out an hour before us and could be seen as a small dot on the horizon again and again when we climbed the next wave. As agreed, the Dar Melica appeared the evening before, the joy was great and at a common dinner there was a lot to tell. We made a meeting point for Sardinia and went to bed early. After all, the next day we had to cover 150 nautical miles, which meant another night shift. As we had aft wind, we extended the jib to port and put the mainsail on starboard. With up to 10 knots our Katinka made her way. The wave got higher and higher and was at least 1.5m high in the afternoon. Despite the rolling movement the autopilot steered the course without any problems. Gaby was doing surprisingly well in these conditions, which made me very happy, as there was a chance for dinner. If this continues we will be in Sardinia tomorrow morning and indeed, the first 50 nautical miles were already behind us by the afternoon. The sun bent to the west and dipped glowing red into the sea, night fell. On the log there were still eight knots. The wave was not quite as high anymore, but you couldn't see it either. Only the rushing towards it could be heard and the whitecaps in the immediate vicinity of the boat could be seen. It was quite a noise when one wave after the other rolled under the boat. Since the autopilot takes quite a lot of power we had to let the engine run at night, but considering the sound of the sea, it was not really a big deal. As it is with the wind simply so it went already a little bit back about midnight to fall asleep then about morning almost completely. While we were still making progress with a little more than five knots during the night, we were only bobbing around with 2.5 knots in the morning. The remaining swell did the rest and so we swayed towards our destination Sardinia. Ten nautical miles from our destination, the land mass had been visible for quite some time, our patience ran out, we started the engine and covered the last part under engine. Dead tired we dropped anchor in the bay Spiaggia di Campulongu, at the south-eastern point of Sardinia, shortly after two o'clock at noon. Now we had to rest for a while and because we had sailed out a small lead, there was time for that until the Dar Melica arrived. After a short time she was lying next to us and Heinz got the dinghy ready to lead the dog Lili ashore. The outboarder went on strike and I picked up the two and drove them ashore. While Heinz and Lili went for a walk, I waded through the water on snow-white sand. Later we looked at the problem on the outboard. After we had cleaned a clogged filter, it resumed its service. Fix and ready and completely done we got into our bunks early in the evening. The next day we hiked to a nearby salt lake and watched free living flamingos. In the evening we went ashore for a walk on the beach. The wind had turned in the meantime and a swell set in the bay. Until we had overcome the breaking waves on the way back our dinghy was half-full and we were all soaking wet. Then we had to spoon out a round. The next day we said goodbye to the Dar Melica, which made its way to Mallorca, while we waited for Peter, who was coming to visit us.
In the meantime we have changed the bay and in the evening we meet an old friend from Fiumicino. Michele came on board the next day and brought a kilo of freshly caught tuna. We were very happy about it and so we had tuna tartar as starter and tuna steak with salad as main course in the evening. 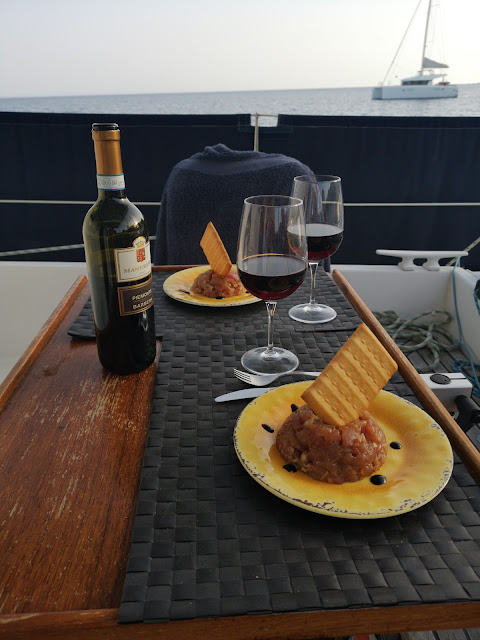 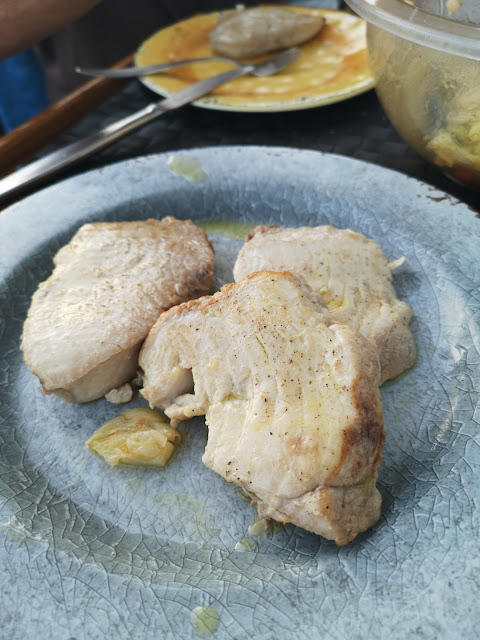 The next morning we had to leave our anchorage, because the Coastgard said we were too close to the beach. Because in the next days Mistral was announced, we need a bay which protects against west winds, this is not so easy in the south of Sardinia. After 17 miles we landed in the bay Poetto, near Cagliari. This bay is supposed to be safe from westerly winds and besides that we want to meet our friend Peter in a week's time. In the meantime we will weather the mistral and have a look at the city. In addition, it is also necessary to do the laundry and take provisions. We will tell you next time how we used the time until Peter arrives and if we could do everything. Until then as always fair winds and keep a stiff upper lip.

We are located with our catamaran Katinka about 14 nautical miles west of Rome in a small marina on the Tiber Channel. Actually, last month we wanted to go further south and then along the Sicilian coast, get out of the Mediterranean Sea and start the Atlantic adventure. But as so often everything came completely different and now we are stuck here and unfortunately we cannot report about our travel experiences but have to deal with completely different things.

The Italian state, like most of Europe, has imposed quarantine on its citizens. There is nothing to criticise in the first place; unusual circumstances require unusual measures. But is quarantine really what we are being given? Wikipedia says: "Quarantine is a temporary, officially ordered isolation of people, animals or plants suspected of having certain infectious diseases or of being carriers of these diseases in order to protect a society from contagious diseases". In other words, we are all suspected of being il…